I want to contribute something to society. And this is an alternative model that can change and improve many people’s lives

Julio Pérez-Tomé is a man with serious ethical principles and passionate about new technologies. He studied Communication at the University of Navarra and the Executive Development Program at IESE (Madrid). From the beginning, his professional life has been closely linked to design, branding and advertising, as evidence, at the beginning of his career, his work in companies as renowned as Wunderman. His entrepreneurial spirit and his concern for starting new projects led him to create and direct, for more than 20 years, the marketing and branding agency Adverbo, and then Linknow. Communication and new technologies seduced him to such an extent that he became the Communication Manager of TEDxCanarias, a spin off of TED, the well-known American company dedicated to spreading powerful ideas through powerfull talks shared on the Internet. In addition, he has participated in different companies and business projects such as Dontknow Internet and Innovation Center for Collaborative Intelligence. He has shared his knowledge through publications (articles in the press, blogs and books such as Beautiful Pyme, published by McGraw-Hill) and through his presence in radio and conferences.

In parallel, he has developed his training and consulting activity under the SmartPerson Generation concept. The axiom of this concept is very simple: “the important thing is not that technology is intelligent, but that it is my relationship with it”. That is to say, “ the key is the lack of technological control — out of fear or negligence — which is verified in thousands of professionals. If you master technology, your work, your energies and your time grow, but if technology dominates you, your activity is diluted and diminished into poor productivity”. His sessions are focused to senior managers with leadership functions and responsibilities in team management, who need to adapt to the changing and complex digital ecosystem. In those sessions, he transmits a comprehensive vision of the opportunities and threats posed by technology and analyzes the social impact that digitalization has brought to people lives and that of organizations. His training programs are taught in different formats: talks, conferences, classes or individual interviews, and are tailored to each organization, depending on the level of digital knowledge that managers have. Some of the firms for which he has worked as a consultant are PricewaterhouseCoopers, Accor Services and Konecta.

His participation in the InnovaMinex project was not accidental, since he was an investor in MinexCorp. From the beginning, he was asked to be part of the project’s driving team. Although Julio had heard about cryptocurrencies, he thought it was something far away, for finance and the Internet geeks. But when opening the door to work on the project, his curiosity about digital innovation made him accept the challenge and rethink his ideas on the subject, presenting an interesting marketing and communication proposal. On the other hand, he wanted to contribute something to society. “People are fed up with the traditional banking and investment systems that have deceived people. This is an alternative model because it can change and improve the lives of many people. And the icing on the cake is the exploitation of gold mines, because other cryptocurrencies, for example, are based on futurology: the currency rises if they correctly guess the future”. According to Julio, what attracted him to the project was innovation, its solidity and the connection with the people who work in it.

At the moment, his job as Marketing Director is to make branding work. “What has value is the brand recognition, to make people dream even with a product that is not finished”, he says. “The product will be successful if it achieves sufficient recognition and the model is trustworthy. In the great cryptocurrency projects what’s really important is what’s behind them. And what attracts me most about InnovaMinex are the people behind the project. Real people, hard working, fun and authentic. And here that is more important than in a conventional product. Transparency is fundamental because there are risks, as in any business, and in this case, as it is such a new phenomenon, the reservations are stronger”, he concludes.

According to Julio Pérez-Tomé, InnovaMinex audience exists in forums where there is a real economy that many authorities have not yet dared to recognize, and to whom they will reach by unconventional means. As soon as INX is known by blockchain and cryptocurrencies communities, the jump to the media will be simple. The important thing is to create a good community of users.

What makes InnovaMinex different from other projects?

Read More
This post is also available in: With the aim of having not only bosses but also leaders within…
TTeam 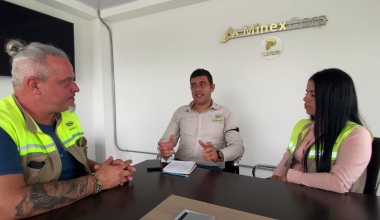 Read More
This post is also available in: We interviewed Daniela Lopez, who is responsible for occupational health and safety,…